The last definition has me DEAD AF. Not too inaccurate, honestly.

When I initially started planning for ringing in New Year in NOLA, plans were a little different. FIRST – let me say, buying this plane ticket was a quick decision and not one of my best. I say that because New Orleans lodging has never been known to be cheap, and around such a momentous occasion, I should have known better. I originally planned to go with a few friends but unfortunately, adulting got in the way and my awesome friends had to miss out. But I enjoyed the trip for them, no worries!

Having my trip go from 4 to 1, I quickly planned to stay in an Air B&B. Always a fan of Air B&B, I rarely opt to stay in private rooms vs. private homes but when you’re going solo, choosing the more cost-efficient, social location is always a good idea. So instead of booking an Air B&B as planned, I decided to save even more money and try something new by booking a hostel.

The idea of staying in a spot with so many strangers had never appealed to me. Ever. My dad, (always the supporter of me being as adventurous as possible) brought up the idea of me staying in a hostel previously and I quickly dismissed the thought from his mind. “Ugh. No way Daddy, those places are full of creeps.” Welp, who’s the creep now, Erica?!

So finding the BEST Hostel was important and I found that in the India House Hostel in New Orleans. Browsing through reviews for this Hostel on Hostel World, Google, Yelp, Facebook and more, I felt confident that this was the spot for me!

I booked my trip with ease by using the amazing Hostel World website which gave me great info on the hostel, what they supplied, the amenities, great pictures and so much more. From the reviews, I could see that this location was frequented by solo female travelers and WOC, and the staff was mentioned to be diverse and welcoming all very important points! I initially had two other Hostels booked, as India House did not have room on those nights, but as soon as I saw more space open up I jumped right on it and I’m glad I did!

Located only minutes from Canal Street, Bourbon and other top spots in New Orleans, this hostel is perfect for those visiting the city to enjoy all of the fun. In a quiet residential neighborhood that’s only steps from a local school and church, India House takes up an entire block with their lodging options! What made it even better? The streetcar was less than 3 minutes walking distance!

Upon arriving at India House, my first thought was that it looked exactly like the pictures! The canary yellow building with various flags perched upon its roof was covered with young travelers chatting, taking long drags of shared cigarettes and lounging against their luggage as they waited to check-in. I approached the counter and I was greeted by a petite woman with a big voice crawling with a New York accent. Her name was Lisa and she was small, yet mighty. (Something I know a lot about, thank you!) She gave the group of us waiting at the desk an intro to the hostel including info on the evening’s pub crawl, the Gumbo she was cooking for dinner ($6 a pop!) and an introduction to the Hostel cat, Taj Mahal who commanded any room he strolled into.
Reminiscent of a hippie commune of sorts stuck in the nineties with a taste of the seventies social crusades, India House decor seems to take you back to a time that you probably didn’t even live through. With features such as hand-painted murals on the dark and deep shaded walls, bumper stickers dedicated to liberal and independent politics (Sanders, H. Clinton, and Kerry were obvious faves of past guests) and an overflowing book exchange nestled next to the front door, this place was made for the free-thinking traveler. The house also included numerous common areas including a TV room, sitting room, pool (closed during the winter season), large kitchen & dining area and tons of room to lounge outside and chat with your new friends.

I tell everyone that as friendly as I am, I’m not always social. I grew up very shy and only became the outgoing side of me when I started in theatre, public speaking, and leadership. So at times, although I’m happy to see people, I’m not always very chatty or ever the life of the party and I have no shame in that, lol.

Well, staying in a hostel will challenge that. I remember simply standing around on my phone one day, and a gentleman from DC just popped up to introduce himself, learn more about me, told me about a project he was working on and then the conversation was over. Or the guy from New Zealand who told me the tales of his time in America after visiting Tampa for a friend’s wedding. I cringed as he told me how he was hustled on his first evening out in NOLA by a guy wanting to shine his shoes, and warned him of the quick schemes that could occur. Another day, I found myself with nonstop giggles with a cutie named Mark at the front desk as we chatted with one of the amazing India House employees, Xianna. We bonded over our love of being fabulous and somehow connected so easily after finding out he’s a Virgo and I’m a Pisces, so immediately I deemed up Beyoncé and Rihanna. While meeting Mark, I also met Sandesh, a GQ-styled Engineer who shares my love of traveling as well as a zodiac sign! While nourishing our immediate connection as strangers, we found that we were born only one day apart and celebrated in the streets of New Orleans with a big hug. You would have thought we were old friends! I could go on and on about the amazing guests I met at India House! From France, Germany, DC, Japan, Miami, California, Chicago, Philly, Brazil, China, India, New Zealand, and the list goes on. Funny thing is – I was the only one from Florida. That’s never happened to me, of course, lol.

The activities put on by the India House staff boosted socializing with other residents by hosting nightly Pub Crawls, sharing local event happenings on the Hostel whiteboard located at the front and offering deals for NOLA tours in the area. Lively, fun, hilarious and energetic, the young staff members made us all feel like we had been friends with them for years. Xianna, Betty and Brent were our hosts for the evenings I joined in, and I couldn’t get enough of the fun!

Because I booked each night individually (I am so dumb. Other than the 2 nights that I switched to India House, I’m not sure why I did this. Please book all at once to not confuse the staff.) I had very different rooms for each night. 2 nights, I took whatever options were still open and that is where I messed up.

As stated earlier, hostels primarily offer dormitory style rooms, private rooms and they usually have mixed dormitories as well, meaning that females and males reside in one building/room. For one night, I was scheduled to stay in one of those rooms. The first two nights in the female dorm was actually wonderful besides the fact that I was in a top bunk the first night. With 3 bathrooms available for 16 women, I never saw them filthy thanks to the young women staying there and the housekeeping crew. I did not find myself wanting to complain about noises, drama or anything of the sort so I can’t say enough about the female dorm!

My third day there, I dreaded the fact that I was moving into a mixed dorm. After meeting the other guests, I felt more comfortable and safe seeing that there had not been any issues… but I still wasn’t excited. As I grabbed my bag and switched out room keys, I headed over to the “Outback” dorm which was located right next to the pool and lively outdoor common area.

Outback was right as I was immediately hit with the stench of musky men, the sound of two guys snoring and heat… so much heat. And it felt like body heat, but no one was even touching me. Like, walking into this room felt like I had run a 10-mile marathon, no deodorant in the summer, in South Florida. Why was EYE sweating?!

I dropped my stuff and walked right out, fearful that I’d upchuck my budget lunch if I stayed any longer. You’d think I was physically attacked how I ran up to the front desk in despair. I couldn’t make a change right then, but later in the evening as I went out with my new crew which included hostel employee, Betty, she let me know that sometimes changes could be made. That hope changed everything for me. After we celebrated the New Year and made it back to our residence, I asked the night employee on duty if there was anything to be done and thank God, there was. As I rejoiced silent, my happiness was stolen as he said, “But you’re still in there for tomorrow night.” PARDON ME? (Please see my booking info above for Day 4. Says female dorm, yes? Okay.) Being the ever-efficient traveler, I promptly pulled out my hard copy reservations and showed him my Hostel World booking info on the app and in my email. Nothing. I was too tired to argue, took the keys for the evening and quickly moved my stuff from that locker room.

The next morning, I was on a mission to fix this issue. The hilariously amazing Manager, Vin who had become familiar with my face was at the front desk with another employee, as I prepared to plead with him. “It smells like dirty men in there, Vin.” I showed him the same proof I showed the evening employee and awaited a solution. I’m so appreciative of his honesty, as he told me they simply made an error. As someone who has always been in some form of customer service, let me tell you that sometimes, just being honest like that can change a customer’s perception because my experience was looking like it was going downhill before I spoke to him. He let me know that they were booked solid and that there was room for me, but not where I planned to be initially but he was going to try to move some groups around. I didn’t want that to happen. I’m no push-over (everyone in my life will tell you this, I am the Queen of speaking up especially if I’m paying), but I thought of all of the foreign travelers there and imagined being split up from my group in this random country after I was promised a particular spot. Wasn’t that serious to me but I wasn’t going back to the mixed dorm. Our compromise? I asked for extra linens and to sleep undisturbed on the common area couch which was steps away from the front desk which was open 24 hours, so safety wasn’t my concern. Usually, guests aren’t allowed to do that so I was grateful that he didn’t make me go to the dorm. How old was that couch and how many people have sat on it?

No clue. But I survived, lol.

Mistakes happen, and that mistake didn’t ruin my trip thanks to an awesome staff and a great manager.

Overall, I cannot stop raving about my first hostel stay. No, things weren’t perfect. No, it wasn’t the Four Seasons. But I had such a blast, met so many new people and I did all of it on a dime. 😉 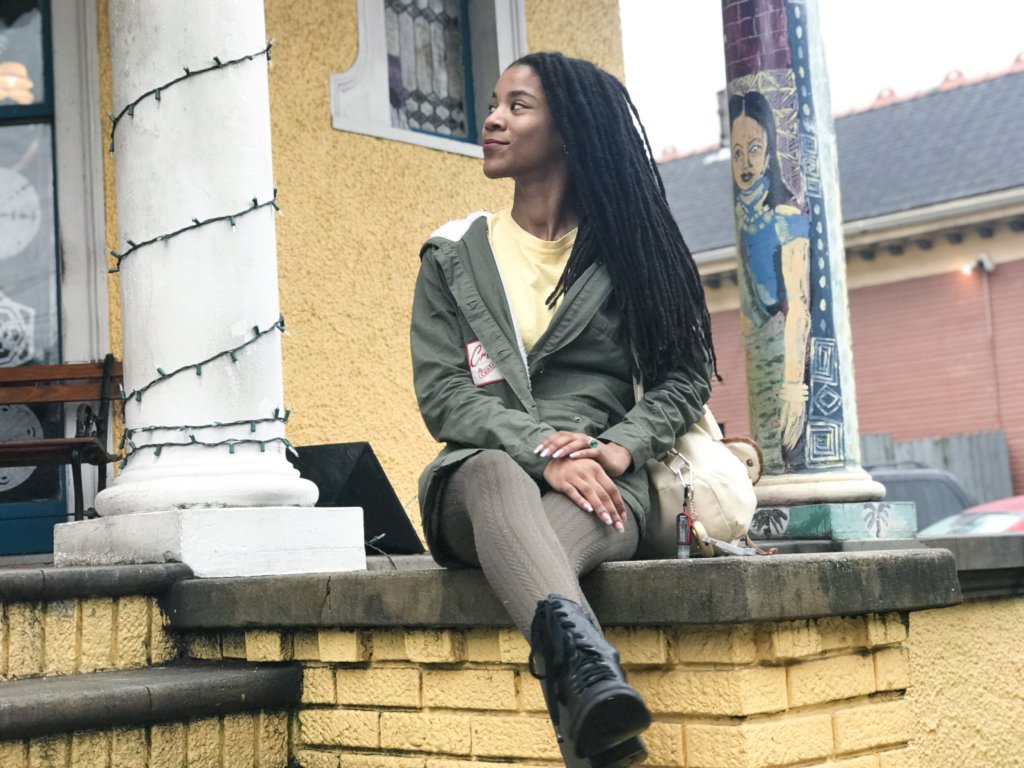